Municipal bonds have been a wonderful investment for over 30 years. They have been perceived as a safe haven for investors since they are used to lend money to local governments and municipalities, and offer an excellent tax advantage: tax free income. This means that an investor who falls in the highest tax bracket owning a municipal bond paying 4% is really earning 5.7%.  So how could it get any better? Well, it did.

Municipal Bonds have seen a substantial upside since 1980. Take a peek at the interest rate earned form municipal bonds in the chart below: 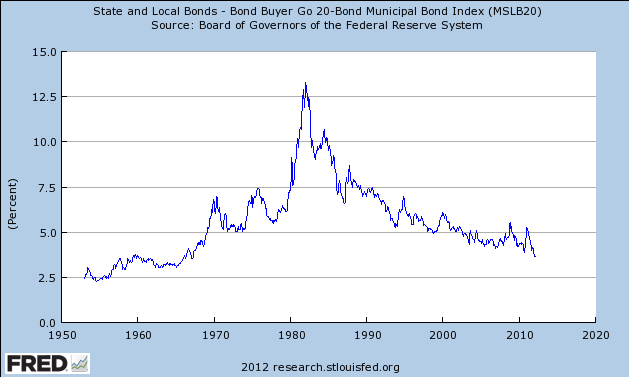 Remember that bonds have an inverse relationship with interest rates:  When interest rates are low, bond prices are high and vice versus. Just take this example: If I have a bond paying me 4% today and interest rates go down, newly issued bonds will pay less than 4%. In this case, my 4% bond will sell at a premium because it has a higher yield than the newer bonds. It has been clear over the last 30 plus years that a declining interest environment has presented a lot of upside to municipal bond holders.

There is a flip side to this, however. If interest rates begin to rise, bond prices will fall. More importantly, they can fall fast and sharply. In 2013, the Federal Reserve Chairman simply spoke about tightening the fiscal policy, which was seen by the market as a rise in rates, and we had a mini bond bust. Just as an example, one of the largest municipal bond funds, Drefus Municipal Bond (DRTAX) dropped 9% over the next 4 months.

Many long-standing advocates for bonds will tell you that this doesn’t matter. If you hold your bond to maturity, you will receive back the par value (the face amount) of the bond. And that is a true statement. But that statement doesn’t account for why interest rates rise in the first place.

The Federal Reserve creates a rise in interest rates to combat inflation. A 4% municipal bond today might sound like a wonderful investment considering the tax equivalent return of another 1.7% and the inflation rate over the last 12 months was 1.02%. This would be a real return of 4.68%.1  But what happens when inflation rises to 3% or 4% or worse? If inflation hits 4%, your real return would only be 1.7% Rather than your money making money for you, it may begin to lose money for you. And what if you are stuck in this downward spiral for the next 20 or more years?

Take a look at the above interest chart again. What happened from 1950 to the early 1980’s? There was probably quite a bit of money lost by those municipal bond holders who bought their bonds in 1950 or anytime over the next 30 years. It didn’t matter if they sold their bonds at market value or held them to maturity, it was a no-win situation. So here is the million dollar question, “Where will interest rates go from here?”

If you are like us and believe there is inflation ahead and interest rates will rise, you may want to take a deeper look at the bonds within your portfolio. Are they short-term or long-term? What would a 1% rise in interest rates do to your portfolio? What is your exit strategy? There is a study known as “behavioral economics” of why humans tend to think and behave the way they do. They classify their studies into various biases, one of which is “normalcy bias.” Normalcy bias is the refusal to plan for or react to, a disaster which has never happened before. Municipal bonds may have seemed like a safe haven for quite some time, but that doesn’t mean things can’t and won’t be the same for the future.

Is the Fed Ready to Pause?

Over the years, the Fed has followed a similar pattern with interest rates. It raises interest rates, then pauses, so it can see how the economy is adjusting to the higher rates.

Our world is a mess, but the cleanup can start in each of us with a simple, random act of kindness. Let’s make a family challenge - What can we do to start a ripple effect of gratitude?

Tax season is officially over for 2022. Listen to our Life Planning 101 podcast this week with special guest Blake Briscoe, CPA, for the list of the most common Dos and Don’ts!